MY FIRST EVER VOTING

I know I didn’t write anything for like months now, that’s because I was busy with work and stuff.

But now I’m back!

Based on the title, I don’t mean like People’s Choice Awards or MTV Awards type of voting, because obviously I’ve done that multiple of times.

What I actually mean by voting is, as some of you might know, that on 9th May 2018 was the day of election in Malaysia. Hence, I being a responsible 25 years old citizen of Malaysia went to vote.
So, it was my first time ever and had no idea what exactly will it be, though my brothers and sister did told me what to do but still, the reality is often different.

That day, I woke up early even though the night before I slept late because we went out for dinner. The reason why we woke up early is because we wanna be there early so we can vote, since the voting session ends at 5pm, and also because we hate standing in a long queue. Who isn't??

Funny thing is, my whole family was located at the same voting place, except for me, and we came up with a theory that it has to do something with my ID number or the address, but honestly, I don’t know.

So you understand that I was a bit nervous since I was there alone, without my family or anyone I know apparently. Luckily, I’m kinda an independent person, so I’m used to do things on my own. The key is, don’t panic!

At the beginning, while I was standing there, I didn’t feel so nervous, but as the line got shorter, I can feel like my palms started sweating and my stomach didn’t feel so good, I was feeling like I wanna fart, but then I didn’t because there was this guy who stood behind me, quite close, so I don’t wanna make a scene or anything.

Even so, I did managed to correct this guy who’s job was to call out people’s name and ID number before you dipped your fingers inside the bottle full of ink right before you start voting because he said my dad’s name wrong. I was like, “Excuse me; my dad’s name is not whatever you’ve just mentioned.” No, I’m just kidding, I didn’t say that but I did correct him.

Anyway, I’m glad it was over and nothing embarrassing happened and I had a nice walk to my aunt’s house after that.

Only now I realized how boring my post this time, but what the hell, I’m gonna share it anyway. 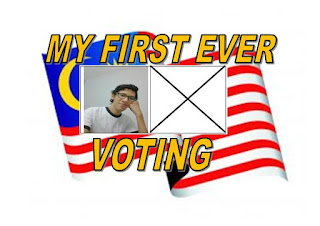